Your email address has been verified.

On March 13, 2019, I was diagnosed with stage three ductal carcinoma HER2-positive BRCA negative breast cancer. To beat cancer it takes a village and Mission Hope Cancer Center is my village—from the volunteers wishing me hello or goodbye, to the gals in the lab who always greeted me with a big hug and my awesome physician who always has a smile that makes all my worries go away. Of course, I cannot forget to mention the chemo nurses at Mission Hope Cancer Center as they are not just nurses, they are your friends. Throughout my treatment journey, I have felt very fortunate to always have someone with me by my side. Mission Hope Cancer Center isn’t just our one-stop-shop we go to because we are sick; it’s our second home. The six rounds of treatment I received saved my life but my journey is far from over and I continue to take it day by day with a smile. I am honored to be this year’s Day of Hope Ambassador. My name is Taryn and I am a survivor.
Janna Douma

For a large portion of the community, cancer is a disease that impacts generations. For Janna Douma, it was no different.
Janna’s exposure to cancer began when her father went to the doctor to check on several spots on his ear, eyelids, and nose. The skin cancer was so extensive that a portion of his nose had to be removed and— amazingly—a new nose utilizing skin from his forehead was crafted. At his death in 2011, his autopsy revealed he also had prostate cancer. 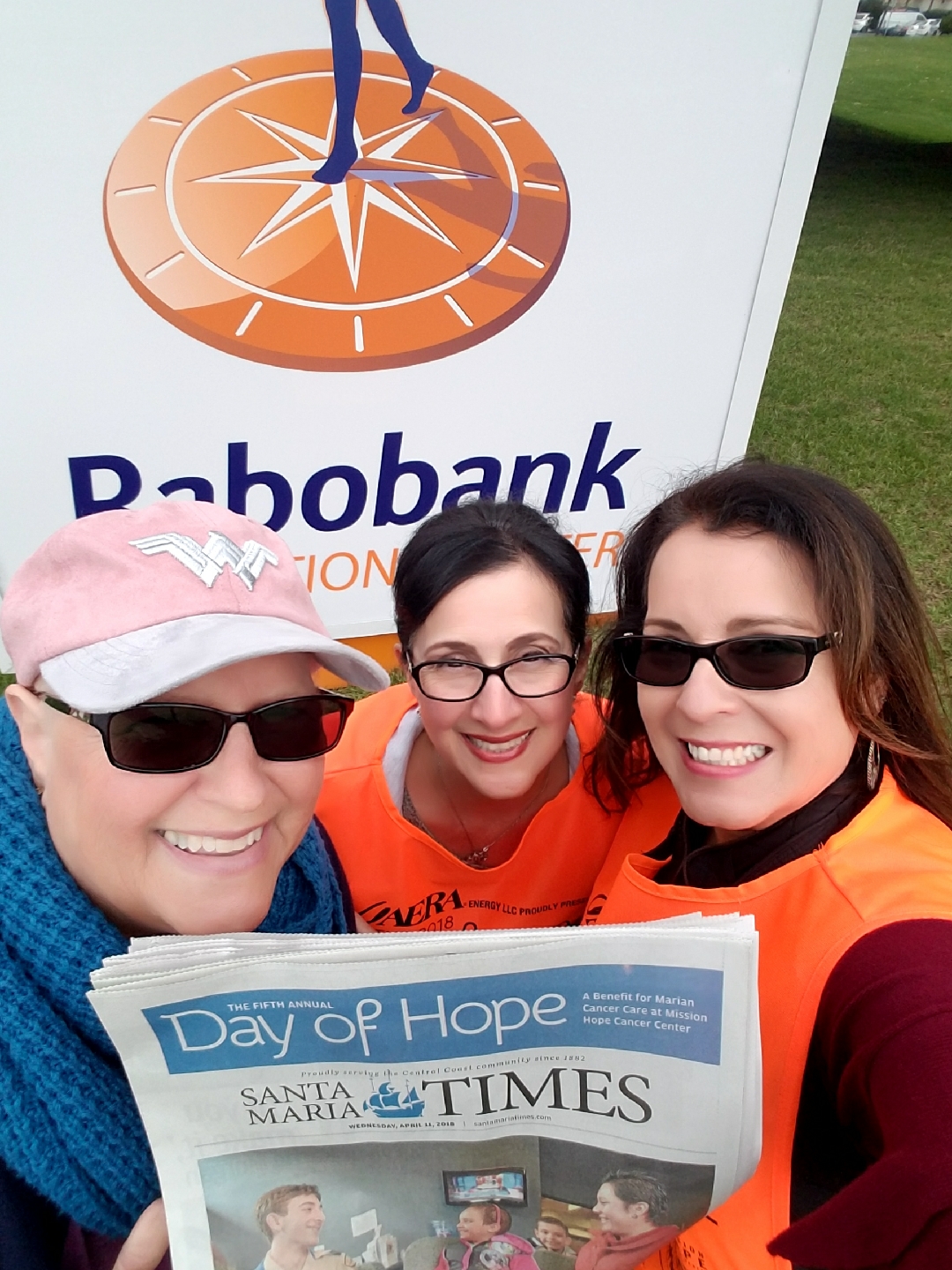 After her dad’s funeral services, Janna’s mother revealed to her that she had tumors visible along her breasts. Recognizing the severity of this revelation, Janna immediately took her mom to the doctor and she was diagnosed with Stage 4 breast cancer two weeks later. At that point in the disease, the cancer had metastasized throughout her body. Never receiving mammograms throughout her life, Janna’s mom was given 18 months to live. Janna undertook caregiving duties and used this precious time to bond with her mom during the difficult season prior to her passing.

Seeing the untimely deaths of her parents, Janna’s resolution was strengthened to take testing seriously. “I am different from my parents, in that I do go to the doctor regularly, and I do get tests regularly,” Janna stated. After her annual mammogram in 2017, she was called back to have a biopsy. A visit with Monica Rocco, MD, FACS, at Mission Hope Health Center, brought the news that her breast cancer was in stage 1 with the aggressiveness of cancer at stage 2.

“From the moment I had my mammogram up until today, the people at Mission Hope have been so very kind, so very caring, treating me with the utmost respect, concern, and love,” Janna said, reflecting on her experience. “Mission Hope is very special and I will continue to support it and be involved with the work there.”

Being true to her word, Janna (pictured above with her pink Wonder Woman hat) was a visible representative during Day of Hope 2018, being featured in several news stories and allowing her cancer journey to have a redemptive element. “I was in the grocery store after Day of Hope and the cashier recognized me from a story. She said, ‘I had been putting off my mammogram but when I saw you on the news I made my appointment the next day!’” Janna excitedly shared.

Janna is now cancer free and plans on participating again in Day of Hope on April 10, 2019. You are invited to join Janna and our spirited teams of survivors and volunteers as we bring hope to our community. 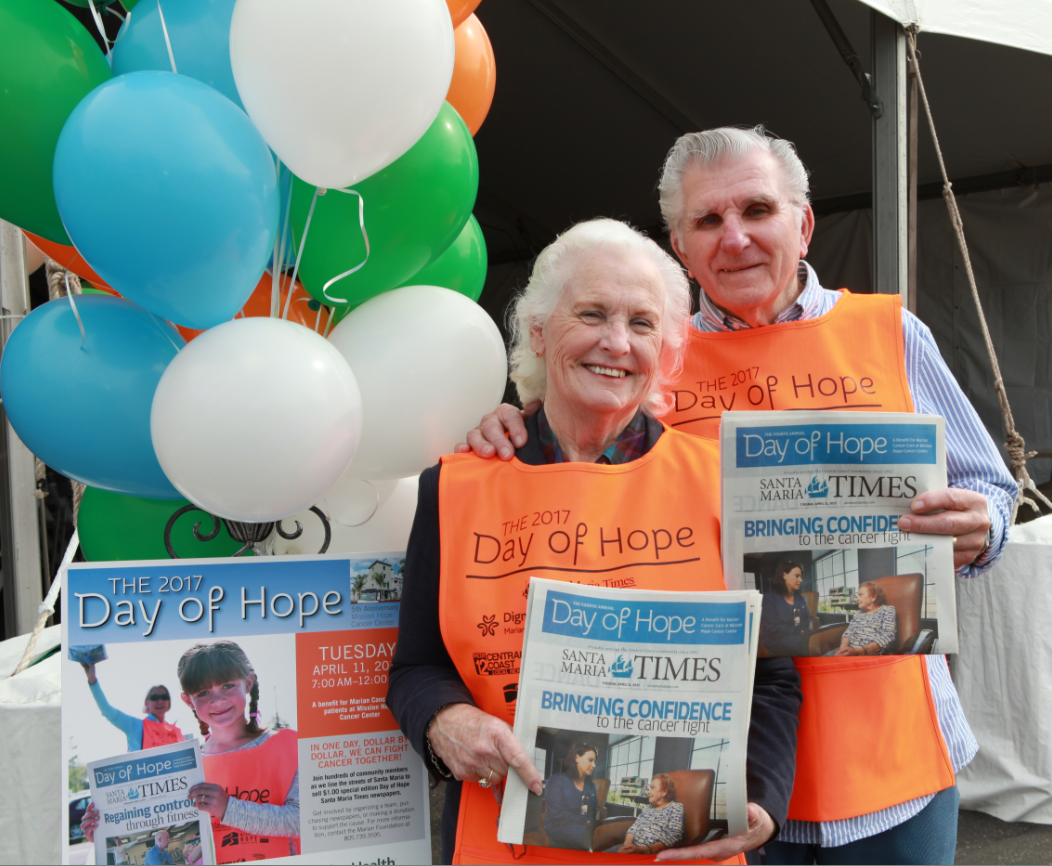 Marriage is a journey filled with many ups and downs. For Thomas and
Patricia Puerling, their 57 year marriage has taken the couple through
their own share of both good and difficult times, such as when Patricia
was diagnosed with breast cancer in October 2012. It was a time filled
with uncertainty but the couple drew on their faith and credits the Mission
Hope Cancer Center team for Patricia’s treatments. After two surgeries
and months of radiation therapy, Patricia is now cancer free.

Unfortunately, this was not the only time the Puerlings would face cancer.
Just a few short years after Patricia’s treatment, Thomas was diagnosed
with rectal cancer. After seeing the quality of care his wife received at
Mission Hope Cancer Center, Thomas felt compelled to also seek care, treatment, and support services at Mission Hope Cancer Center. Thomas underwent concurrent chemotherapy and radiation plus two surgeries,
and he too is now in remission.

The Puerlings understand how fortunate they are to have a comprehensive state-of-the-art cancer center in their own community. Their message as survivors is simple – hope. Thomas notes,
“We want other people to know that they can have a positive outcome to a cancer diagnosis. If we can just give one person hope, it’s worth it.” 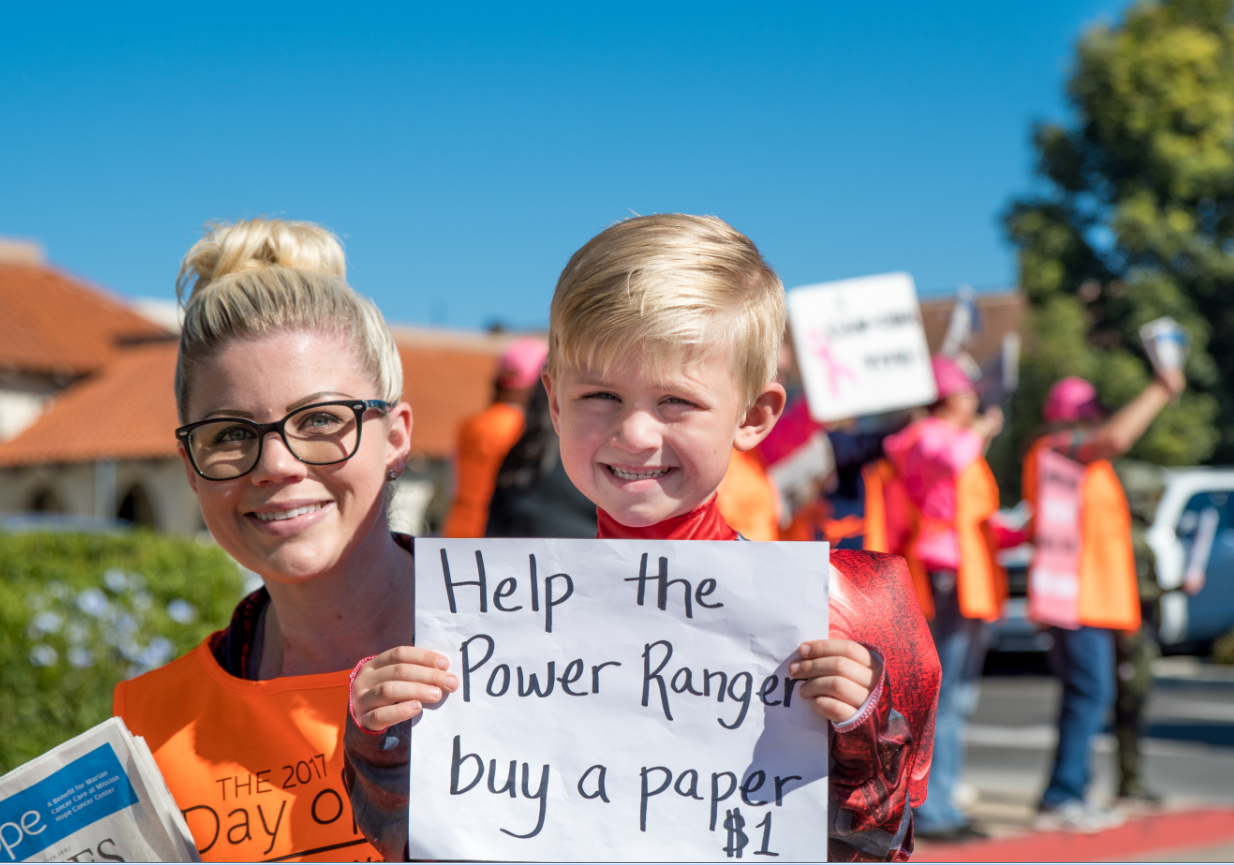 Mellissa Matheson
Cancer survivor Mellissa Matheson is living proof of how community
donations truly save lives. In 2014, Mellissa was diagnosed with
bilateral breast cancer at the young age of 26. As a mother of three,
Mellissa’s children were only six, two, and 11 months old at the time.
Since she developed bilateral breast cancer extremely early in life,
it was suspected Mellissa may have a genetic syndrome. Thanks to
the support Mellissa received from Marian Cancer Care, she was
provided with genetic testing vital to developing the best possible
treatment plan. And, due to the treatment she received from Mission  Hope Cancer Center, Mellissa is now cancer-free and looks forward to  living a long, happy, and healthy life with her family.


Jesse and Rosa Manriquez
With a family history of cancer, advocating on the behalf of local cancer 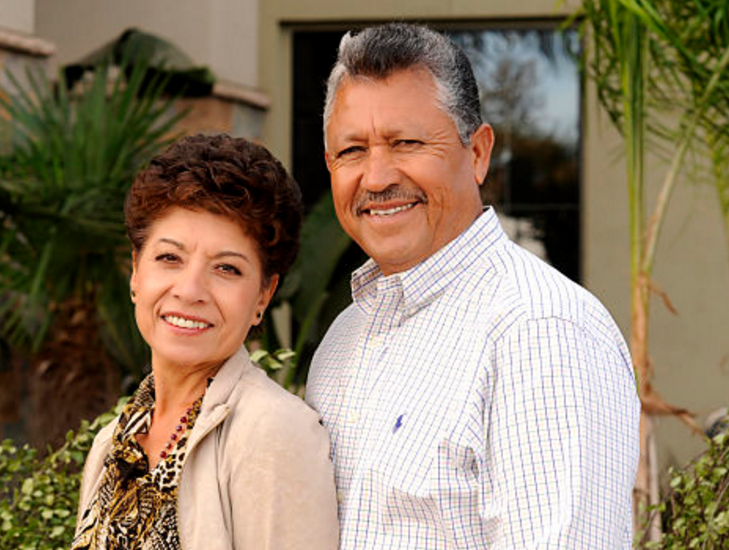 patients and their families is a cause that remains near and dear to the hearts
of Jesse and Rosa Manriquez, community philanthropists and owners of Rancho Harvest, Inc. Cancer has impacted the lives of the Manriquez family
with the loss of Rosa’s mother, Trinidad Guadalupe Sanchez, to colon cancer,
and the loss of Jesse’s cousin, Jose Leal, at the age of 59 to prostate cancer.

Cancer not only affects those with the disease. It affects an entire community
and does not discriminate based upon an individual’s health or age. This is
why so many have chosen to support the healing work of Marian Cancer Care
at Mission Hope Cancer Center and Day of Hope.

When Day of Hope first launched five years ago, Jesse strongly believed in
supporting it from the start. As a loyal Hope Level Sponsor of Day of Hope,
Rancho Harvest has helped provide necessary support for this day to become
a rallying event for the Santa Maria Valley and the surrounding areas. The
employees, too, at Rancho Harvest have proved to be a prolific newspaper
sales team—earning accolades as the top fundraising team in 2017.

Day of Hope has seen a tremendous level of growth in team registrations on a yearly basis. Forming a team is an excellent way to build cohesion among an existing team or is a great excuse to get together with family and friends. It has quickly become an annual tradition for a number of teams. As for Jesse, his support of local cancer patients remains as vibrant as ever, enthusiastically noting, “I look forward to Day of
Hope every year, and it keeps getting bigger and better!” 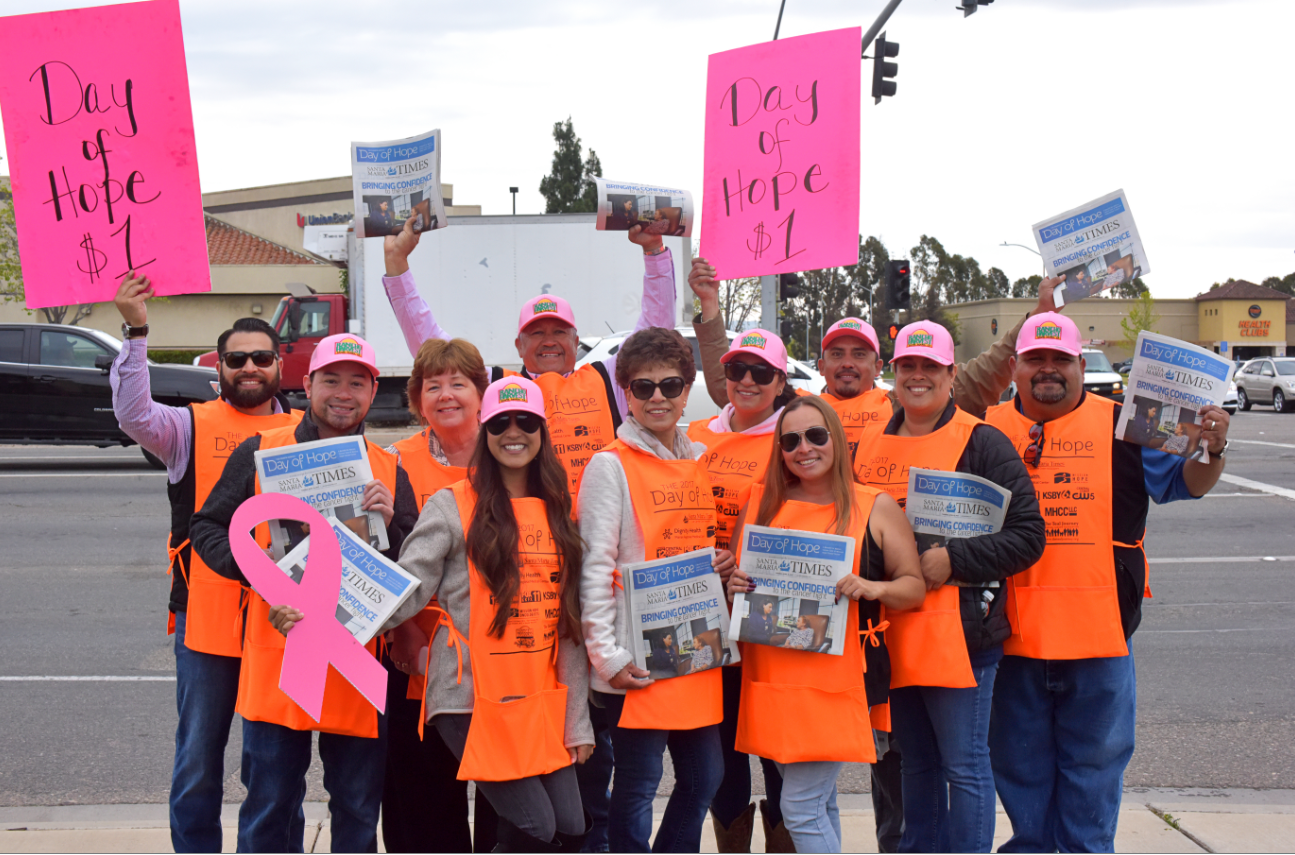